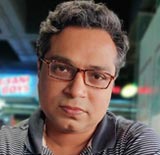 Moreover, he is now working on In Love with a Gorgon, his next collection of poems. He also writes short fiction. Of late, he is working on a novella, “Ashes of the Cremated Dead.” He loves to write creative non-fiction as well; his first non-fictional prose is “A Double-born Kid’s Tale,” a work in progress. His research interests include postcolonial theories with reference to cultural politics and emancipatory aesthetics in the domain of postcolonial literatures across the globe, and he is writing “Not Afraid of Double Rejections: Notes on a Cultural Translation in Postcolonial Literatures.”

Now he lives in Dhaka and teaches English at Victoria University of Bangladesh, having taught it before at Southeast University and at Royal University of Dhaka.